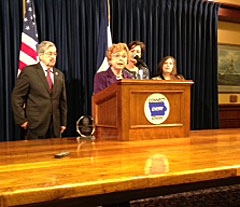 West Des Moines has become the third city in Iowa — and only the 12th in the country — to be named a “connected community” by a group pressing for expanding broadband Internet services.  West Des Moines Mayor Steve Gaer  says three years ago city officials asked the areas largest employers to name the biggest impediment to growth in West Des Moines.  “They all said technology. We need broadband and higher speed connectivity,” he says. Indianola was the first city in Iowa to be designed as a “connected community” and Webster City was the second to get the designation.

Webster City Mayor Janet Adams says their focus now is on getting to the “next level” of internet speeds. “Anyone who has a good economic development plan, that community will need to know what technology is available, who’s utilizing it and what do we need to do next,” Adams says.

Iowa cities and towns can get help in testing broadband speeds and other advice from “Connect Iowa” — a federally-funded organization.