You are here: Home / Fires/Accidents/Disasters / Northwest Iowa tornadoes first in the area in October in 40 years 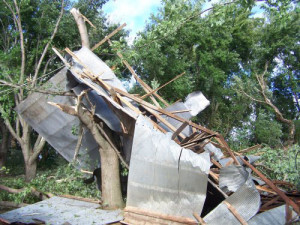 A grain bin destroyed by a tornado in Plymouth County. (KLEM photo)

State Climatologist Harry Hillaker says the tornadoes that touched down Friday are very rare. “Statewide, it’s about once every three years we see a tornado after October first,” Hillaker says.At least six tornadoes touched down in rural areas of northwest Iowa last Friday night, destroying 21 farms in Woodbury County. Another 42 farms sustained major damage, according to the county emergency services director. Only one person suffered minor injuries in a car accident associated with the storm.

Hillaker says when tornadoes hit Iowa in October, they tend to be in the southern or eastern parts of the state. “The last time we had tornadoes after October first in the northwest third of Iowa was probably 40 years ago, in October 1973,” Hillaker said. Even with the six tornadoes, it’s been a relatively quiet year for twisters in Iowa.

“We were at just 15 confirmed tornadoes for the state for the whole year (prior to Friday),” Hillaker said. “If that number had held up, that would have been the lowest total since at least 1953.” The National Weather Service reports, between 1980 and 2012, Iowa received a total of 13 tornadoes in October. The last one occurred in 2007.