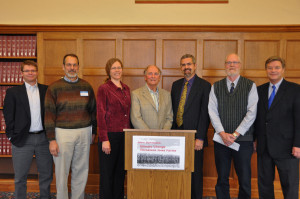 Scientists gathered for forum on climate change at Drake University, Gene Takle is directly behind podium

More than 150 scientists from 36 colleges and universities in Iowa are jointly issuing a call for action against global warming.

The director of the Climate Science Program at Iowa State, Gene Takle, is one of the lead authors of the group’s Iowa Climate Statement for 2013. “The last couple of years have underscored the fact that we are very vulnerable to weather conditions and weather extremes in Iowa,” Takle says.

Both years were marked by heavy spring rains followed by droughts that damaged Iowa’s farmland. “This has become a real issue for us, particularly with regard to getting crops planted in the spring,” Takle says. “We had 900,000 acres that weren’t planted this year because of these intense spring rains.”

As the climate continues to warm and change in the coming decades, Takle projects even more harm will be done to Iowa’s ag economy. He’s encouraging farmers to update their management plans to make the land more resilient to extreme weather. “Practices that were installed 30 years ago just need to be updated for the current climate that we’re experiencing with these heavy rains,” Takle says.

The Iowa scientists are also calling on the USDA to update its policies to better protect the land. “We want to make sure that we have, for farmers, something that is going to address the current and the projected future situation,” Takle says.

Takle says it’s imperative the world reduce its dependence on fossil fuels because the rise of carbon dioxide in the Earth’s atmosphere is at the root of the problem.

Takle made his comments today at a press conference, prior to a forum for science educators at Drake University in Des Moines. The Iowa Climate Statement for 2013 was released at the event.

Our state has long held a proud tradition of helping to “feed the world.” Our ability to do so is now increasingly threatened by rising greenhouse gas emissions and resulting climate change. Our climate has disrupted agricultural production profoundly during the past two years and is projected to become even more harmful in coming decades as our climate continues to warm and change.

Swings from one extreme to another have characterized Iowa’s 2013 weather patterns. Iowa started the year under the widespread drought that began in 2011 and persisted throughout 2012. But the spring of 2013 (March‐May) was the wettest in the 140 years of record‐keeping, creating conditions that hampered the timely planting of corn and soybean fields. During those months, sixty‐two Iowa counties experienced storms and flooding severe enough to result in federal disaster declarations.

By mid‐August, very dry conditions had returned to Iowa, subjecting many of the state’s croplands to moderate drought. These types of weather extremes, which are highly detrimental to Iowa’s crops, were discussed in our 2012 Iowa Climate Statement, where we also noted that globally over the past 30 years extreme high temperatures are becoming increasingly more common than extreme low temperatures. In a warming climate, wet years get wetter and dry years get dryer and hotter. The climate likely will continue to warm due to increasing emissions of heat‐trapping gases.

Climate change damages agriculture in additional ways. Intense rain events, the most notable evidence of climate change in Iowa, dramatically increase soil erosion, which degrades the future of agricultural production. As Iowa farmers continue to adjust to more intense rain events, they must also manage the negative effects of hot and dry weather. The increase in hot nights that accompanies hot, dry periods reduces dairy and egg production, weight gain of meat animals, and conception rates in breeding stock. Warmer winters and earlier springs allow disease‐causing agents and parasites to proliferate, and these then require greater use of agricultural pesticides.

Local food producers, fruit producers, plant‐nursery owners, and even gardeners have also felt the stresses of recent weather extremes. Following on the heels of the disastrous 2012 loss of 90% of Iowa’s apple crop, the 2013 cool March and record‐breaking March‐through‐May rainfall set most ornamental and garden plants back well behind seasonal norms. Events such as these are bringing climate change home to the many Iowans who work the land on a small scale, visit the Farmer’s Market, or simply love Iowa’s sweet corn and tomatoes.

Iowa’s soils and agriculture remain our most important economic resources, but these resources are threatened by climate change. It is time for all Iowans to work together to limit future climate change and make Iowa more resilient to extreme weather. Doing so will allow us to pass on to future generations our proud tradition of helping to feed the world.