You are here: Home / Crime / Courts / DOT hears from both sides on the use of traffic cameras 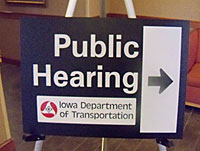 The Iowa Department of Transportation heard from several people on proposed rules to regulate red light and speed cameras during a public hearing in Ankeny Wednesday. The members of the DOT listened to the comments, but did not respond during the hearing.

Windsor Heights Police Chief Dennis McDaniel told DOT officials the city had tried to work with the department to set up a speed camera on I-235, but  says they finally decided to sue after getting nowhere through conversation.

McDaniel says the proposed rules will do nothing to improve the situation. “Please listen to my warning on this. If the rules committee allows these regulations to move forward as proposed, it is the equivalent of the executive branch of government doing the job of the entire legislature, to which we should all be concerned with,” McDaniel says. 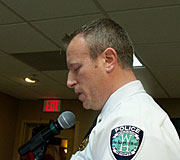 McDaniel says the rules are one-sided and allow the DOT to render one final opinion without using scientific evidence to justify them. “If these rules are adopted without objective standards and a clearly referenced appeals process, the rules committee will be creating a climate for the continuation of present litigation and all but ensuring that the DOT will be involved with future legal battles with other municipalities and counties,” according the McDaniel.

Dustin Miller, the director of government affairs with the Iowa League of Cities, says the league believes home rule should continue and allow the cities to decide on the placement of traffic cameras. “The rules cite nothing express from the Iowa code that would provide the authority to go against city control for these local affairs,” Miller says. Miller says the proposed DOT rules are too vague. “The department calls for uniformity, but there doesn’t seem to be actual standards or threshold for cities or for counties to reach. The determination of the standard is needed and warranted,” Miller says.

The Iowa Insurance Institute’s Tom Stanberry spoke out in favor of the cameras, saying they have been shown to reduce accidents. “And in fact we believe so strongly in the reduction of personal injury, that we would sacrifice an increase in property damage in order to reduce personal injury to people in automobile accidents,” Stanberry says.

He says the most recent study of red light cameras done in Arlington, Virginia showed a decrease in accidents in various time periods from when a light turned from yellow to red. He says that included a reduction of 86-percent one-and-a-half seconds after the light turned. “The industry standards will tell you that people running a red light any time after one second produces the most serious accidents. Which are the front to side collisions — or what people generally referred to as T-bone collisions — as opposed to rear end collisions,” Stanberry says. “And those are the collisions that  result in death and the usually the destruction of both cars in almost every incident.”

Sioux City Police Chief Doug Young says his city turned to mobile speed cameras after man complaints about problems in the construction zones along the interstate.

“We determined that the best course for enforcement was the use of mobile speed cameras. We conducted no less than three public meetings that were held in Sioux City Iowa — not three hours away,” Young explained. “Public support was overwhelming. We presented our findings to the city council with overwhelming support and  understanding that they (speed cameras) would only be used on I-29, and during its reconstruction.”

Young says they did the same thing with their red light cameras and the data supported their use. He says they went to court and won a ruling against the DOT that the speed cameras were not an obstruction in the construction zone. Young says the new rules will hurt their efforts to improve the safety of the interstate traffic. “Which these recommended guidelines — which amount to nothing more than a ban — we pout officers lives in danger, as well as the motoring public,” Young says.

Iowa A-C-L-U executive director, Ben Stone, spoke out in favor of the rules so the state has a uniform use of the cameras. “While we do support the rules as proposed, we have a couple of suggestions,” Stone told the DOT officials. “The first is that we would recommend that cities would be required to undergo a trial period of lengthening the yellow light duration for a measurable period of time.”

Stone says his organization believes the research shows the yellow light period is not long enough, and making it longer would have an impact on safety. He says they also have a recommended distance for the signs announcing the red light cameras, and they went regulations on putting cameras where the speed slows down and going down a hill. Stone says they also believe cities should be required to keep data on the different types of speed and red light violations.

Jim Kimkinnan had some short comments. “I’d like to propose that all revenue from the traffic cameras go to road and safety improvement,” Kimkinnan says. He says this seems a logical use for the money. “If all these people are advocating the red light and speed cameras are doing it for safety purposes, they should have no objection that all of the revenue go toward traffic and road safety improvements,” Kimkinnan concluded his remarks.

He says all violations in Davenport are reviewed and signed off on by a police officer before they go out to a motorist. “Automated traffic enforcement is used responsibly by Davenport to improve traffic safety and (save) lives. ATE’s in Iowa should be standardized on Davenport’s proven record of traffic safety success,” Donchez proposed.

David Beer is a business man in Cedar Rapids who owns a rental car business. He says he is frustrated when he gets tickets for his rental cars when is his not driving them. “Contrary to popular belief — you can get a traffic ticket in Cedar Rapids without driving,” Beer says.”When the police department says ‘don’t speed and you won’t get  a ticket’, it’s not true.”

Beer says he is frustrated again when he has to fight the tickets issued to him when he was not in the cars. He says the departments who are touting the  speed cameras and complaining about the DOT rules are having the tables turned on them. “I hear a lot of frustration on the part of the police departments. It’s the same frustration that we have as citizens and business owners when we try to get something accomplished,” Beer explains.  “It’s just that they’re in that boat now. They’re the ones being regulated. They’re the ones having the ordinances adopted and placed and they are going to have to deal with them. And they don’t see that. It’s time to see that.”

The DOT had allotted three hours for comments at the hearing, but those in attendance took just over an hour to make their statements. The DOT will review the comments made at the hearing along with written comments as it moves forward with the rules. The rules would also have to be given approval by a legislative committee before final adoption.