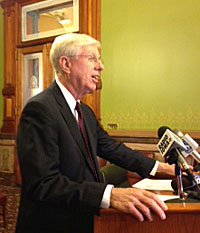 Iowa Attorney General Tom Miller announced today he will ask voters to reelect him to a ninth term in 2014.

“I seek another term based on a record of accomplishment and a commitment to do much more to benefit Iowans,” Miller said during a statehouse news conference.

Miller was first elected attorney general in 1978. He ran for governor in 1990, but lost in that year’s Democratic primary. Miller was reelected attorney general in 1994 and in each of the four times he’s stood for reelection since.  In this eighth term, Miller has drawn criticism from some Democrats for representing Republican Secretary of State Matt Schultz in lawsuits over Schultz’s effort to cross-check Iowa voter registration lists with federal immigration data to find illegal voters. Miller said Democrats should “look back” on what happened in the 2012 election.

“There wasn’t voter suppression in our state like there was in Florida and Colorado,” Miller said. “There was a huge vote in our state, one of the few states that had a greater vote than four years earlier…We had an enormous victory for Barack Obama.”

Miller, who is currently 69 years old, was asked by a reporter if he’s “worried about (his) health.” Miller said he watches what he eats and exercises regularly to stay healthy.

“I’ve been blessed with very good health,” Miller said. “…In a lot of ways I’m a very young 69. A lot of people are amazed when they find out the number is that high.”

Miller discounts the idea his bid for a ninth term puts the Democratic Party’s eventual nominee for governor at a disadvantage in making the argument 24 years is too long for Republican Terry Branstad to be governor.

No Republican candidate has yet announced he or she plans to run for attorney general.