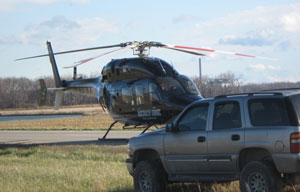 A helicopter takes Patrick Douglas to the hospital after his rescue.

An Ottumwa man remains hospitalized after being trapped in his vehicle for nearly two full days. A caller to the Wapello County Sheriff’s office at 1 p.m. Sunday reported finding a car which crashed off Highway 63 south of Eddyville between two bridges near a creek.Officers learned the driver, 60-year-old Patrick Allen Douglas, had been there since 5 p.m. Friday when he fell asleep behind the wheel and his car left the road. It took rescue workers, using the JAWS of life, nearly an-hour-and-a-half to free Douglas from the vehicle.

He was flown to a Des Moines hospital, where he remains listed in critical condition. Authorities say Douglas will likely be charged with failure to maintain control and failure to have a valid license.