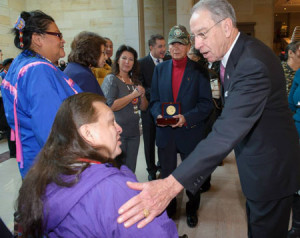 The code talkers used their native languages to communicate key military intelligence during wartime, befuddling U.S. enemies who couldn’t interpret the language. Their service is credited with saving lives.

Grassley and Iowa’s other Senator, Tom Harkin were co-sponsors of the legislation, enacted into law in 2008, that authorized Congress to present gold medals to the Native Americans who served as code talkers during foreign conflicts in which the United States was involved during the 20th century. 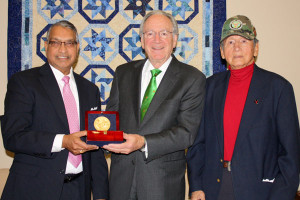 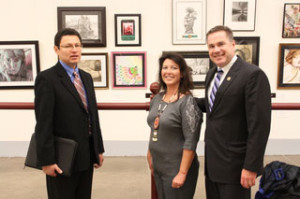 Congressman Bruce Braley with Larry Lasley Sr. and Theresa Mahoney of the Sac and Fox
Tribe.

Photos courtesy of the offices of Tom Harkin, Chuck Grassley and Bruce Braley.