You are here: Home / Business / Triple-A says all of state could see gas below $3 yet this year 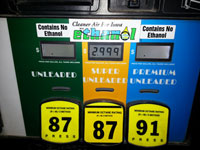 The statewide average price  for gasoline in Iowa could be less than three dollars a gallon before the end of the year, according to a report from Triple-A-Iowa. Spokeswoman Gail Weinholzer  says crude oil prices are falling, stockpiles are rising and refineries have already made the change from summer to winter fuel blends. “Everything is boding well as far as the switchover having been completed,” Weinholzer says, “demand being reasonably met by supply, the hurricane season is over in the Gulf (of Mexico).”

While some areas are already seeing gas below the  three dollar mark, Iowa’s current statewide average is $3.11 a gallon. Prices may fall between ten and 15-cents a gallon before December is out, she says, and prices may remain at the lower level for much of the winter.

Weinholzer says, “Certainly, there’s no reason to expect prices to do any sort of significant increases between now and the early part of spring.” This isn’t anything out of the ordinary, she says, as gas prices typically reach a low for the year in mid-December. “I would expect prices to remain relatively low, depending of course on the wild cards that we always talk about: the political situation in the Middle East and the overall world economy as far as the recovery from the recession.”

Iowa’s $3.11 a gallon average is 14-cents cheaper than the national average. Prices in Davenport are the lowest in the state, averaging $2.94, while Waterloo has the highest prices at $3.15.