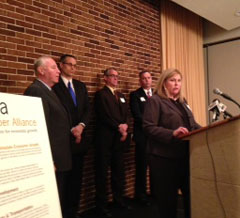 The state’s 16 largest chambers of commerce are calling on lawmakers to simplify Iowa’s income taxes for businesses and individuals. The Iowa Chamber Alliance is also renewing its push to raise the state gas tax.

The Chamber Alliance supports a “two-lane” approach to tax reform that would allow businesses and individuals to choose to file under the current system or a new one that would be simpler, with lower rates and fewer deductions. Iowa Chamber Alliance executive director John Stineman says there’s a way to accomplish these goals, even with a politically divided Iowa legislature where Democrats control the Senate and Republicans control the House.

“Certainly there are a lot of signals being sent that it may be a shorter or less ambitious session, but that doesn’t mean that the issues that need to be addressed won’t be addressed,” Stineman ays. “If there can be a solution — a bipartisan solution — I think that they’ll take that opportunity. I’ve never seen a legislator, I never seen a politician that would turn down an opportunity to have another thing to take credit for.”

The Iowa Chamber Alliance held a news conference late this morning in Des Moines to release its wish list for legislative action in 2014.

The legislature’s top leaders will speak to the group early this afternoon.