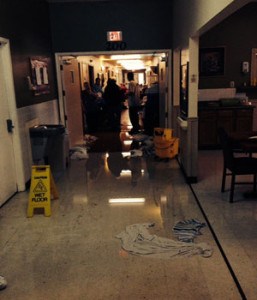 A break in a water pipe that supplies fire sprinklers at the Norwalk Nursing Home and Rehabilitation center Thursday put the fire department’s emergency response plan to the test.

Norwalk Fire Department Captain Doug Richardson says they had to evacuate a total of 43 residents after the broken pipe sent water flowing through the ceiling and toward the patients rooms. “It was I guess controlled chaos for lack of a better term. It actually went pretty smooth, it’s something we practice for response to these multi-patient incidents — we just don’t respond to a lot of those calls,” Richardson says. The patients ranged in age from 30 to 90, and they needed 16 ambulances to get them to other facilities.

Norwalk is part of the Westcom Dispatch center that serves many of the suburbs of Des Moines and Richardson says they have such a situation programmed into the dispatch computer. “So that when we asked for these strange requests of 16 ambulances, the computer already has it figured out so that we don’t have to think who may be available,” Richardson explains.

Since it was a rehab and nursing home, Richardson says they had to act on site to coordinate the evacuation of the residents to other health care facilities.  “That was one of the first things we tried to identify — of those people who needed to be transported — which of those had specific medical needs, are they on a ventilator, are they on oxygen, who has time sensitive medications that the need to take in a relatively short amount of time. Those are the things we tried to identify and get those patients transported right away,” Richardson says.

He says while everything appeared to go off smoothly, they are already reviewing the event to be sure everything was covered in the plan. “We are going to actually gather all the players in this, including the care facility staff, and just kind of do and after action review of what we did, what went well and what we can improve on, so that we continue to improve our skills and ensure that the policies and procedures we have in place are effective,” Richardson says.

Richardson says the administrators of the care facility are trying to figure out why the water pipe failed.