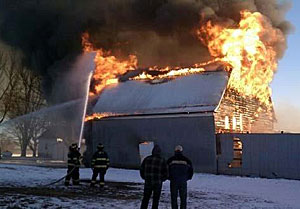 A 78-year-old man’s northwest Iowa barn was destroyed by fire on Wednesday afternoon.

Heavy smoke was pouring out of the barn when fire fighters arrived on the property, about four miles north of Orange City. It rapidly became engulfed in flames, however. Fire fighters from three cities in the area battled the blaze, but the barn and its contents are a total loss. Authorities say a heat lamp inside the barn started the fire.

No animals or humans were injured in the blaze. The barn was the property of 78-year-old Peter Vanderzwaag of Orange City.

Iowa once had more than 200,000 barns, but there are only about 50,000 remaining today. Preservationists say about a thousand Iowa barns are either torn down or destroyed each year.