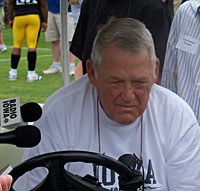 He retired in 2011 after coming to Iowa as part of Kirk Ferentz’s original staff in 1999. Parker is credited with masterminding Iowa defenses that led them to many big victories through the years.

The defensive guru suffered from diabetes and had part of his right leg amputed prior to the 2010 season. That led to Parker meeting with reporters from a golf cart during the annual media day, where he was always a popular interview.