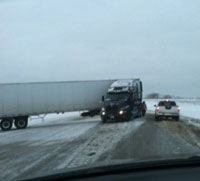 Semi jackknifed in the snowy conditions.

After a surprise blizzard blasted central Iowa Thursday afternoon, forecasters are predicting another storm system is developing that will hit us within a matter of several hours.

Meteorologist Jim Lee, at the National Weather Service, says drivers will need to take it slow, unless they want a repeat of the two chain-reaction pile-ups Thursday west of Des Moines that involved a total of 55 vehicles. “We’re looking at another winter storm system coming through late tonight and tomorrow, Saturday, that will spread more high winds across the state as well as some additional light snowfall,” Lee says. “So that could make travel hazardous at times.”

Reports say traffic was so bad in the Des Moines area, a few school buses that left school at 4:30 didn’t deliver kids to their homes until 9 o’clock last night.

Lee says this next storm system should follow much the same track, starting in northwest Iowa and spreading. “We’ll see light snow across most of the state,” Lee says. “The accumulations won’t be terribly high but with strong winds coming in, particularly during the day on Saturday, the blowing snow could be an issue, somewhat like it was yesterday but perhaps not as severe as it was in some areas.”

On the plus side, a warm front should arrive on Sunday, bringing unseasonable highs in the 40s to much of Iowa.