You are here: Home / News / Iowa’s 2016 Caucuses an “opportunity” rather than “obligation” for Clinton 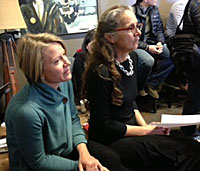 The women who guided the campaigns of Barack Obama and Hillary Clinton to the finish line on Caucus Night 2008 both say Clinton should look at the 2016 Iowa Caucuses as “an opportunity” to show there’s “energy” behind her candidacy.

Jackie Norris, who managed Obama’s 2008 Iowa Caucus campaign, also guided Al Gore’s 2000 Iowa campaign. “It’s early and I think the success of any campaign is that you see Iowa as the opportunity,” Norris says. “It’s not an obligation.”

Teresa Vilmain was recruited in June of 2007 to run Clinton’s Iowa Caucus effort.

“It’s an opportunity to one, meet voters and two, organize,” Vilmain says of the caucus process. “And one of the biggest lessons learned is get in early and honor the work where the work is done and what do you do with this energy.” 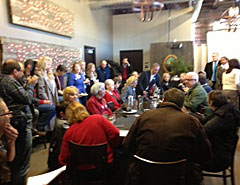 Vilmain and Norris spent their Saturday in Des Moines at a “Ready for Hillary” event. Craig Smith, a senior advisor to the “Ready for Hilary” Super PAC, met with a variety of activists within the Iowa Democratic Party to explain his group. He told reporters it would “political malpractice” not to try to harness the grassroots “energy” for Clinton now.

“In 2008, I think in retrospect there were lots of things done that could have been done or should have been done differently and it is incumbent I think upon everybody to learn lessons from mistakes,” Smith said Saturday. “Hillary Clinton is one of the smartest people I’ve ever met and she’s not going to make the same mistake twice.”

Some of Clinton’s core supporters in 2008 were part of Saturday’s event and they’re planning to hold events around the state in March or April to encourage activists to sign onto the “Ready for Hillary” effort.