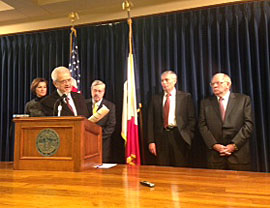 The state’s 20 largest employers are promising to hire 2,500 veterans over the next five years.  The Iowa Business Council is made up of leading Iowa businesses, the three state-supported universities and the Iowa Bankers Association.

“Collectively we employ one in eight Iowans,” says Larry Zimpleman — the chairman president and CEO of Principal Financial Group who is the incoming chairman of the Iowa Business Council.

The pledge to hire more veterans has become part of the governor’s “Home Base Iowa” initiative to lure soldiers who’re leaving the military to Iowa.

“The returning veterans come to us with a variety of skills that often map into different disciplines that are more important for certain Iowa Business Council members,” Zimpleman says.

Zimpleman estimates veterans make up about five percent of his own company’s current employee roster.

“Home Base Iowa is an exciting program that builds our Iowa workforce with the most talented group I know: our returning veterans,” Zimpleman says.

This week the Iowa Senate is poised to approve a bill that would end state income tax charges on military pensions. It’s one of the items on Governor Terry Branstad’s list of actions he argues state government should take to make Iowa more attractive to veterans.

“This shows that they’ve got it on the fast track,” Branstad says. “Good things are happening.”

Late last week the Iowa Board of Education voted to allow veterans, their spouses and their dependents to pay in-state tuition rates at the state’s community colleges.

Zimpleman and Branstad made their comments this morning at the governor’s weekly news conference.