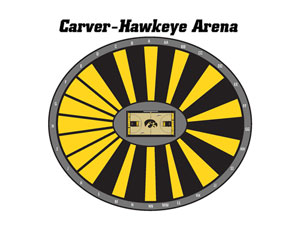 Fans at the Michigan State game are asked to dress in either black or gold depending on their section. (U-I graphic)

The Iowa Hawkeyes face as big test at home this evening when they host Michigan State in Big Ten action. With a victory the Hawkeyes would equal the longest winning streak in Carver-Hawkeye Arena at 21 games. Iowa’s last setback at home was a 62-59 loss to the Spartans on January tenth of last year.

“If you are going to win a championship, you’ve got to go through Michigan State. That’s just the standard that Tom has set. We all hope to get to the point where we all can get that good,” Iowa coach Fran McCaffery.

The Spartans have won 10 of the last 11 games in the series and McCaffery says the Hawks must match their level of toughness. He says the key is to consistently play with that level of toughness on every possession every night, as he says every team plays that way at some times during games.

McCaffery says they must match Michigan State’s intensity on both ends of the court. “Anything short of a complete understanding of that — you are going to be in a difficult position against this team,” McCaffrey says. He says they have come close to beating the Spartans and he believes they have learned from those games.

Iowa is 5-2 in the Big Ten and Spartan coach Tom Izzo felt the Hawkeyes would be in the hunt as he says Iowa was his surprise pick at the start of the year.

Izzo says the Hawkeyes depth is impressive and says McCaffery has built the team in the right way. “Hopefully we are going to be up for the task,” Izzo says.

The Spartans are 7-1 in the league race after a home loss to Michigan but they have stayed in the hunt despite a couple of key injuries. He says this team pulls for each other better than any other team he has had. Michigan State is 18-2 overall. Iowa is 16-4.