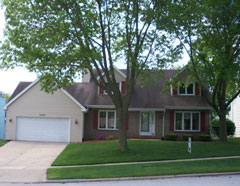 A young couple from central Iowa will be featured on tonight’s episode of the popular HGTV program “House Hunters.” The show was shot back in July in Des Moines.

Local realtor Margie Monachino helped Jake Boesch and Rebekah Risbeck — who had up to $200,000 to spend on their first home. “This story was a little bit unique because one of them wanted a brand new home and one of them wanted a fixer upper. I found them one in between and it happened to be my parent’s home,” Monachino said.

“It’s been written up in Forbes as being a great place for young professionals and yet you can still find good buys out there,” Monachino said. “You know, when you think about it, trying to find a home under $200,000, that doesn’t happen in very many cities.”