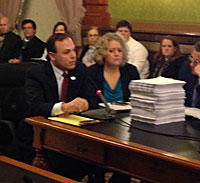 References to “being in the hot seat” and “crossing swords” with legislators popped up during Republican Secretary of State Matt Schultz’s appearance before a senate committee this afternoon.

Democrats who’ve criticized Schultz for investigating voter fraud focused on the plight of three eligible voters who had their 2012 ballots tossed out because they were mistakenly on a list of ineligible voters. Schultz told legislators it was his fraud investigation that resolved things.

“These three people would not have their voting rights today restored and in the system fixed for them were it not for these DCI investigations,” Schultz said.

Court records were not accurate, according to Schultz, who says two of his staff members have to manually input the names of felons who’ve had their voting rights restored because there’s no way — yet — to merge the two lists electronically. Senator Matt McCoy, a Democrat from Des Moines, told Schultz that rather than pursing cases of alleged voter fraud, he should be using federal “Help America Vote Act” grants to improve the voter registration system.

“I would spend my energy and my efforts making sure that this isn’t a hand-entered system,” McCoy said. “I mean, that’s embarrassing.”

Schultz, who announced in January he would seek the Republican Party’s nomination for congress in the third district, accused Senate Democrats of a politically-motivated attack.

“It’s unfortunate this committee has not taken voting problems seriously until now, even though there have been multiple people voting illegally and cancelling legitimate votes out of Iowans,” Schultz said in an opening statement.

The case of the eligible voters who had their votes discarded came from Cerro Gordo County where Ken Kline is the county auditor. He spoke for about a minute during the senate committee meeting.

“I’ve served as county auditor for 21 years. I consider this a serious issue — disenfranchisement of voters from a procedural issue,” he said. “And I’m not here to point fingers. I’m not here to play politics, make accusations. I’m a problem solver and that’s my approach.”

Eight voters in Cerro Gordo County cast provisional ballots because they were on the list of felons ineligible to vote. In December the DCI agent determined five were felons and could not legally vote, but three were eligible voters. Schultz said the investigation of cases of potential voter fraud in the 2012 presidential election will wrap up soon.