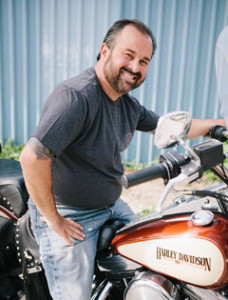 A History Channel show with an international following features a trio of Iowans who make a living out of finding hidden treasures in barns, back yards and basements.

“American Pickers” is based in the Quad Cities but the stars, Mike Wolfe and Frank Fritz, with the help of Danielle Colby, go cross-country roughly two weeks every month, wading through junk to find valuable antiques.

Fritz, who still lives in his hometown of Davenport, says he started collecting rocks and beer cans as a boy. The 49-year-old says he hasn’t ever really had a big find and there’s no “holy grail” for him.

“I’ve never found a $50,000 vase or ‘vaaaahse’ or anything like that, I’ve never found a Picasso,” Fritz says. “I just find everyday stuff that most people could find on their own. I can’t really think of any major hits I’ve ever had.”

Still, he and Wolfe have made some amazing finds, like an intact 15-gallon visible gasoline pump and an exceptionally rare 1940s vehicle called a Piaggio Ape, thought to be the only one of its kind in North America. Fritz has an affinity for toys, metal signs and oil cans, but admits his real passion is motorcycles. He now has more than 70 in his collection.

“I’ve been into motorcycles my whole life,” Fritz says. “I bought my first Harley when I was 15. I had a lot of dirt bikes. That’s my problem, I like all types. I’ve never been a one-brand rider. I like dirt bikes. I like on-off/dual purpose bikes and then I like street bikes.”

He laughs it off when he’s called the Jay Leno of the Quad Cities, as the late night comedian also has a sizeable collection of two and four-wheel vehicles. “American Pickers” premiered in January of 2010 and draws millions of viewers weekly. Fritz says the white van they travel around in is their original 2006 vehicle with 270,000 miles on it…and counting.

A big believer in karma and what-comes-around-goes-around, Fritz says he always strives to offer fair prices for his finds. “I suppose there would have been a time possibly that maybe I bought something that I didn’t know how much it was worth, I knew it was a good deal or something,” Fritz says. “Boy, I sure have overpaid for a lot of stuff. They don’t show that part. It’s called paying for your education.”

His own house, he says, does not resemble the homes of some of the hoarders he visits. He says he’s built a nice warehouse for his always-growing collection of collectibles. The show’s mainstay is the Antique Archaeology shop northeast of Davenport in Le Claire, while Fritz manages another shop of his own in Savannah, Illinois, just upriver from Clinton.

Fritz will make three appearances Friday and Saturday at this week’s Des Moines Home and Garden Show at the Iowa Events Center in Des Moines.