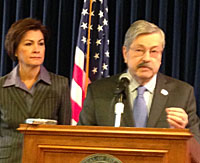 Republican Governor Terry Branstad says he’s glad Democrats in the Senate have backed away from their call to reopen the Iowa Juvenile Home in Toledo.

“I’m pleased that they have recognized that they shouldn’t be focusing on the institution,” Branstad says. “The focus needs to be on providing the best treatment and the best education for the kids. That was denied them at Toledo.”

“I’m glad they’ve backed off their insistence of reopening the institution, but I believe that we still to keep the focus on the needs of the children,” Branstad says. “…I don’t think it needs to be a particular institution or one-size-fits-all. I think it could be a combination of things.”

Late last year Branstad ordered all the teenagers at the Iowa Juvenile Home in Toledo to be either sent home or to a privately-run facility and the home closed in mid-January. Iowa Juvenile Court officers say they need a secure facility like Toledo for about 20 teenage girls who’ve committed a crime and would otherwise be sent to prison.

“I think, philosophically, we need to go away from this corrections mentality and instead go to an idea of how we can provide the best treatment, support and to help these kids that are troubled, that need assistance,” Branstad says.

The Senate Human Resources Committee is scheduled to debate a bill this week that’s being crafted in response to the Iowa Juvenile Home’s closure. A lawsuit filed by four legislators and the president of AFSCME Council 61 — the union the represented workers at the home — that challenged the home’s closure is now under review by the Iowa Supreme Court.