You are here: Home / News / Families lobby for medical marijuana treatment for their epileptic children 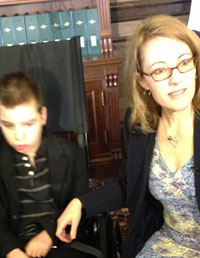 Maria LaFranze and her son Quincy.

Two mothers of children who suffer from a rare form of epilepsy are urging Iowa lawmakers to enact a law that would let their children take a liquid form of marijuana, as a medication.  Maria LaFranze of Des Moines and her son, Quincy, appeared at a news conference to discuss the issue.

“Sick Iowans do not know that they need medical cannabis until it is too late, until their lives are already destroyed,” LaFranze said, her voice cracking with emotion. “People in other states have had great success with medical cannabis.”

Sally Gaer of West Des Moines is importing a drug from France for her daughter, who still has multiple seizures each week.

“I’m very disappointed in everybody in this building who is afraid they may not be reelected for doing what’s right for the citizens who are fragile and medically ill in Iowa,” Gaer said.

But Senator Joe Bolkcom, a Democrat from Iowa City who’s co-sponsoring a medical marijuana bill, said that’s the political reality as no Republican would step forward to co-sponsor the legislation, and therefore the bill won’t be considered this year. 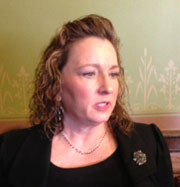 “We have a lot to do to work to do to educate legislators in this building about the importance of this issue to many, many Iowa families,” Bolkcom said.

Senator Tom Courtney, a Democrat from Burlington, put it another way.

“You know medicine and politics d6on’t mix and that’s what the problem is here,” Courtney said. “It’s an election year and everybody’s nervous.”

Senator Matt McCoy, a Democrat from Des Moines, said Republican lawmakers can learn firsthand about the issue by meeting with the mothers of these epileptic children.

“I believe that if they did, they would find that their fears that they have about this issue are unfounded,” McCoy said.

Twenty states have laws which allow marijuana to be used for medical purposes. Both Gaer and LaFranze said they know families with epileptic children who have moved to Colorado where the children’s condition has improved after a few months of taking marijuana in liquid form.  Gaer said if her family went to Colorado to try it, they’d be prosecuted as drug traffickers if they tried to return to Iowa to see their family.

“How is that fair?” Gaer asked.

Gaer said her daughter is at risk every day of dying of sudden unexplained death from epilepsy.