You are here: Home / News / EndIowaDogRacing.com launched to lobby lawmakers 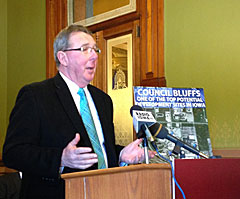 Backers of a plan to end greyhound racing at the casinos in Council Bluffs and Dubuque are amping up their public relations push, launching an on-line petition drive on their new www.EndIowaDogRacing.com. Rick Dickinson, president of the Greater Dubuque Development Corporation, spoke at a statehouse news conference this afternoon.

“Greyhound racing is the Blockbuster Video of the gaming industry,” Dickinson said.

Like Blockbuster, Dickinson argued dog racing is “bankrupt” because it no longer has enough customers. Dubuque Mayor Roy Buol said the $3.3 million the Mystique casino spent on the prizes for greyhound breeders last year would be better spent as charitable contributions to Dubuque area schools, fire houses and non-profit groups.

“Greyhound racing is no longer profitable,” Buol said during today’s news conference. “…Together we can achieve the common sense vote to end the dead, debt-ridden venue of greyhound racing.”

The Council Bluffs casino provides a $10 million annual subsidy for greyhound racing at its facility, but former Council Bluffs Mayor Tom Hanafan stressed how the track occupies prime real estate that could be better used.

“We’re in a situation where we need more hotels,” Hanafan said during today’s news conference. “And one of the attractive things about this area is the opportunity to build hotels and some retail.”

Bob Mundt, president and CEO of the Council Bluffs Chamber of Commerce, said the track sits near one of the Midwest’s high-traffic areas — the intersection of two Interstates.

“That creates a lot of opportunities for us and as we see the decline of dog racing and the ability to reuse that particular location for higher and better uses, we stand in favor of the elimination of dog racing,” Mundt said.

Hanafan pointed to how Omaha redeveloped the site of the old Arsarben horse track.

A bill that would end greyhound racing is eligible for debate in the Iowa House. The legislation calls for the two casinos to pay reparations to the Iowa greyhound breeders who will no longer be able to race their dogs in Dubuque or Council Bluffs. Dickinson, the Dubuque chamber executive who also sits on the Dubuque Racing Association board of directors, called that’s a “fair” settlement.

“Seventy million dollars over a seven-year period I think by any Iowan’s standards is an unbelievable amount of money to go away,” Dickinson said.

Iowa is one of just seven states which host greyhound racing today. No other state which has closed down dog tracks has called for payments to the greyhound breeders.