You are here: Home / Agriculture / Norman Borlaug statue to be installed in U.S. Capitol March 25th 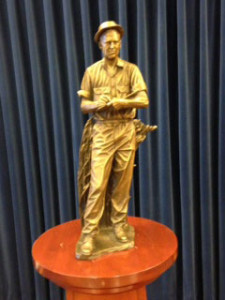 This is a smaller version of the Borlaug statue that will sit in the U.S. Capitol.

The newly-created statue of Iowa native and Nobel Prize winner Norman Borlaug  will be installed in the U.S. Capitol March 25, on what would have been Borlaug’s 100th birthday.  Ken Quinn first met Borlaug 15 years ago, when Quinn became the leader of the World Food Prize organization Borlaug helped create.

“I found him to be the most humble, hardworking, inspiring person I ever encountered,” Quinn says. “…I was stunned to find out how few Iowans even knew who he was or what he had accomplished, so I made it my goal that I wanted to have as many Iowans and as many people in our country know all that he had done and what a great hero he was.”

Borlaug, who died in the fall of 2010, grew up in Cresco and went on to develop higher-yielding, drought-resistant varieties of wheat that are credited with saving billions of people from starvation. Each state has two statues in the Capitol’s Statuary Hall and Iowa legislators voted a few years ago to have Borlaug’s likeness will replace the statue of a Civil War-era hero from Iowa.

A sculptor from South Dakota has created a statue of Borlaug at work, standing in a field of wheat, taking notes. “The statue is finished,” Quinn says. “There’s a final few flourishes being put on it. It’s right now in Aberdeen, South Dakota, and it’ll be moved from there to the Capitol.”

The base of the statue is made of Iowa limestone. An invitation-only crowd will gather for the dedication ceremony next month in Washington, D.C. and Lieutenant Governor Kim Reynolds will be among them.

“When considering the life and legacy of Dr. Borlaug, we know that he was a humble man with a strong Iowa work ethic,” Reynolds says. “…His impact continues to inspire people around the world today.”

Governor Terry Branstad says he saw that firsthand during a trip to India last year.

“The people in India just admire and respect him so much because he saved so many people from starvation in their country,” Branstad says.

The governor laid a wreath at a statue of Borlaug which stands outside India’s premier agricultural institute. The budget for the project to get Borlaug’s statue placed in the U.S. Capitol will run under $300,000 and is financed with a donation from Du Pont/Pioneer and an anonymous donor.

The 7000 pound statue of former Iowa Senator James Harlan that has stood in the U.S. Capitol for a century will be trucked back to Mount Pleasant. Harlan was a friend of Abraham Lincoln and his daughter married Lincoln’s son. Harlan once served as president of Iowa Wesleyan College in Mount Pleasant and his statue will be placed outside the Harlan-Lincoln House museum on campus. Branstad says he “feels an affinity” for Mount Pleasant because his step-mother is from Mount Pleasant and the lieutenant governor lived there for seven years when she was a child.

“I want to be there for the rededication of that (statue) when it occurs later this spring,” Branstad says.

The other statue from Iowa that will remain in Statuary Hall in the U.S. Capitol is of the likeness of former Iowa Governor Samuel Kirkwood. Branstad says he, too, was a Civil War-era hero.

“I will say I’m kind of partial to Kirkwood because he’s the only other governor who served non-consecutive terms,” Branstad says, with a laugh.

Kirkwood was Iowa’s fifth governor, then went on to serve as a U.S. Senator before being reelected to serve as its ninth governor.  Branstad is currently serving as Iowa’s 42nd governor. During his previous 16-year stint as governor, he was the state’s 39th chief executive.