Top ranked Western Christian finished the final seconds of the first quarter with a flurry to  break a 15-15 tied  and never let Des Moines Christian pull even again in a 66-53 win in the Class 2A quarterfinals.

Coach Bill Harmsen says that first quarter finish was a spark that got them going. “I think there was six seconds left and we put a group in and we got a quick steal and quick layup and it was just a nice momentum builder at that point,” Harmsen says. “But I tell you, Des Moines Christian played very hard and I give them a lot of credit.”

The score had been tied at 15-15 when Western Christian made the mini run, and Des Moines Christian never tied it up again or got the lead. Harmsen says the opening game win builds confidence. “We have a lot of young kids in our rotation that have never played on this floor — and that showed today. I said to them in the locker room, ‘now you have an opportunity to come back and play again’,” Harmsen says. 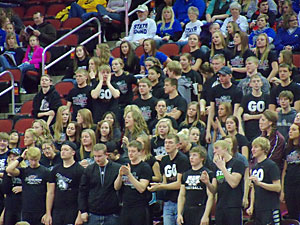 The Wolfpack’s Jamie Gesink led all scorers with 19. She says playing a game this early in the day was different, but they didn’t change  their preparation.

“Not really, I mean we knew what to expect because we played them before, so that was kind of nice. We just played our game and we know how to defend them,” Gesink says.

Des Moines Christian used two buzzer-beater shots in a wild run to get to the state tournament. Senior forward Sarah Juhl says their faith helped them. “I think the main factor in us getting to state is our faith.  I believe fully that this is a miracle that we got to state.  Because it’s not us, it’s God,” Juhl says. Juhl led Des Moines Christian with 15 points as the Lions finish the season at 20-5.

Western Christian is now 25-1 and keeps its attempt for a third straight championship alive. They face North Linn in the semifinal Thursday at 1:30.