You are here: Home / Health / Medicine / Branstad says “a lot more study” needed before marijuana should be legalized for medical use in Iowa (AUDIO) 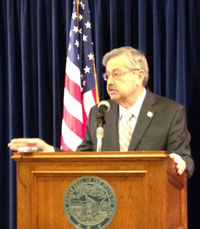 Governor Terry Branstad is warning there are too many “unintended consequences” to legalizing the use of marijuana for medical purposes in Iowa. Branstad met recently with the mothers of children who suffer from a severe form of epilepsy — mothers who say an oil derived from marijuana is a treatment that’s working for epileptics in other states.

“I think we have to be careful about drafting our laws just for a few people that have a particular problem or ailment,” Branstad said this morning during his weekly news conference.

The governor said medical marijuana — in whatever form — can easily fall into the hands of “people that don’t have prescriptions.”

“Already the biggest increase in drug abuse has been where you have unauthorized people using other people’s prescriptions,” Branstad said, “so the abuse of prescription drugs is a big problem in this state and I don’t want to do something that’s going to exacerbate that.”

Twenty states and the District of Columbia now have prescription programs that dispense marijuana to cancer patients, epileptics and others who say the drug offers them relief they cannot find in other prescription drugs. Branstad is not convinced Iowa should join that group.

“I just think there’s a lot more study that needs to go on before we embark on this kind of an experiment,” Branstad told reporters near the end of his news conference.

Key leaders in the Iowa House and Senate said last week it appears the tide is turning as legislators hear from constituents with major medical problems and learn more about medical marijuana programs in other states, but none predicted the legislature will vote this year to legalize marijuana for medicinal purposes in Iowa.