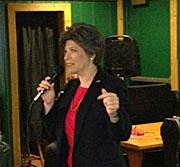 Republican Joni Ernst, a candidate for the U.S. Senate, says the Obama Administration’s approach to the crisis in Ukraine is “misguided.”

“I have spent time in the Ukraine,” Ernst says. “I was there when it was part of the Soviet Union and it’s devastating for me to see what’s happening. But I know that we have to take actions, but are those actions military? Not necessarily.”

Ernst, who is also a unit commander in the Iowa National Guard, questions why a dozen U.S. F-16 fighter jets are being deployed to Poland to monitor the situation along Ukraine’s border with Russia.

“We haven’t gone through proper negotiations yet,” Ernst says. “The only time you’re going to commit troops is when negotiations have failed. Have we truly put forth the effort, imposing economic restrictions on Russia? Have we done all of those measures before we start getting involved militarily?”

Ernst was deployed to Iraq and Kuwait in 2003 and 2004 as commander of a transportation unit of 150 Iowa National Guard soldiers. Now, a decade later, Ernst suggests Americans do not want to send troops to Ukraine.

“Is the public behind any action over there? Do we have the resources to support any action over there and what is our overall objective there? What do we plan to do if we would engage militarily and then what’s the withdrawal plan? I think it’s very ill thought-out,” Ernst says.

The world’s seven largest industrialized nations — including the U.S. — on Wednesday demanded that Russia stop it’s push to separate the region of Crimea from Ukraine and warned sanctions would follow.  Ernst doubts that threat is taken seriously by Russia.

“It’s just like any other foreign policy,” Ernst says. “We say something. We do something different, so there’s no coehsive message to anybody that goes against the United States or our wishes.”

Russia’s military has seized control over Ukraine’s Crimean region and a Sunday referendum will ask residents there if they want the territory to become part of Russia. The Obama Administration and western nations have warned Russia the election results will not be acknowledged. Ernst agrees that any decision to split the Ukraine should be decided by all residents of the country, not just those who live in the Crimean region.

“That would be like one of our counties, say a county down in my area deciding, ‘Oh, I want to be part of Missouri, so my county’s just going to vote to join Missouri,'” Ernst says. “No, that’s not the way it should be. It needs to be the entire of Ukraine making that decision.”

Ernst gave a speech at the Westside Conservative Club in Urbandale early Wednesday morning, then spoke with reporters there before making her 8 a.m. arrival at Iowa National Guard headquarters in Johnston where she is on active duty this week. Ernst has missed all of the votes taken in the Iowa Senate this month and a majority of all the votes taken in 2014. Ernst says she is able to balance her duties as a state senator, a National Guard commander, a mother and a candidate for the U.S. Senate.

“I am a busy person,” Ernst says. “I’m committed to a lot of different things, but it is doable.”

Ernst says she is “actively engaged” in her work in the state senate and the Republican leaders there keep her up to speed on what’s happening in the state capitol.