You are here: Home / News / Reynolds says neither she nor Branstad knew of secrecy deals with fired Democrats 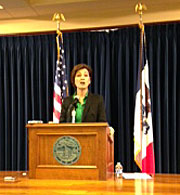 Iowa’s lietuenant governor says neither she nor the governor knew anything about state managers firing six Democrats from state government jobs after Republican Terry Branstad took office — and paying those six $280,000 in settlements which forbid them from talking publicly about their dismissals. Lietenant Governor Kim Reynolds says she found out about those secrecy deals Sunday, the day The Des Moines Register published a story about them.

“We found it troubling when we learned about the confidentiality clause,” Reynolds says. “And we intend to put together a group that will perform a comprehensive review of the process.”

Reynolds says she does not believe the governor’s staff was not involved in firing these Democrats and paying them to keep quiet about their dismissals. It was the state agency managers who drew up those deals, according to Reynolds.

“We’re not a micromanager and we expect them to manage their office,” Reynolds says. “If something does raise that we believe needs to review4ed at that point, we will step in and put together a group that will review this in a comprehensive manner so we can either take action on whatever steps need to be taken action on moving forward.”

Reynolds made her comments during a statehouse news conference. Governor Branstad is on a family vacation in Arizona this week.

The executive director of the Iowa Democratic Party issued a written statement Sunday, saying the firings are another example of Branstad using “intimidation to try and force people from their positions so his cronies can be appointed.” Branstad is being sued by the state Workers Compensation Commissioner. Christopher Godfrey says he is the only openly gay man in a top state management role and Branstad’s chief of staff cut his salary by a third to try to force Godfrey to resign.