You are here: Home / News / Voting rights of an estimated 50,000 at stake in Friday decision (AUDIO) 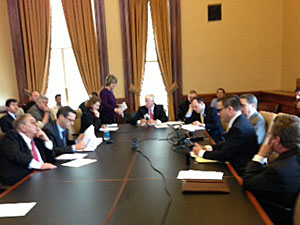 Review panel meeting at the statehouse.

The legal battle over whether a second drunk driving offense bars someone from running for office in Iowa was waged before a three-member review panel Wednesday, with Iowa’s attorney general suggesting the voting rights of tens of thousands of Iowans could be at stake.

“Our calculations of how many people are in jeopardy is about 50,000,” said Attorney General Tom Miller .

Miller is part of the panel that will meet again Friday to decide the case and determine who can participate in a Democratic primary for a Des Moines-area senate seat. Democrat Ned Chiodo, a candidate for the Iowa Senate, is arguing fellow Democrat Tony Bisignano is ineligible because the Iowa Constitution prohibits those guilty of “infamous crimes” from voting or holding office. Gary Dickey, Chiodo’s attorney, argued the panel cannot ignore the “rule of law” just because there might be “collateral damage.”

“The purpose of this was not to disenfrancise people,” Dickey said. “That decision was made back in 1857 when the (state constitution’s) framers got together and decided that.”

“Since the rights of thousands of Iowans to vote is at stake here, a definition that would take away that right should err on the side of the voter,” Glazebrook said.

Secretary of State Matt Schultz, another member of the panel deciding this case, suggested the group take Thursday to review the details.

“I want to review the case law submitted by the parties and look through their legal arguments and look at the case law myself,” Schultz said. “This is a very important decision and I don’t think it should be made lightly.”

The attorney general’s office plans to alert the district court that an appeal is likely to be filed quickly by the side that loses in Friday’s decision. The senate seat directly in question is currently held by Jack Hatch, a Democrat who is running for governor.

AUDIO of first 55 minutes of hearing

AUDIO of next 16 minutes of hearing