You are here: Home / Fires/Accidents/Disasters / 350 pigs die in barn fire near Oyens 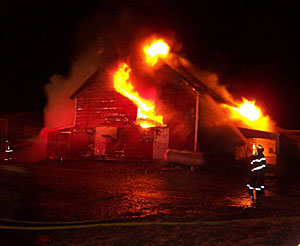 Firefighters say 350 pigs died in this barn fire near Oyens.

A large hog barn was destroyed by fire early this morning in northwest Iowa’s Plymouth County, wiping out a herd of 350 pigs.

The fire hit George Dirksen’s two-story barn near Oyens about 2 A.M. Oyens Fire Chief Brian Juhl says as soon as fire crews got to the scene, they knew they had their hands full.

“When we arrived, we had fire visibly showing and coming out of the second floor which was full of straw,” Chief Juhl says. “Also, when we opened it up, we had fire on the main floor.” The Le Mars fire department also responded.

Firefighters tried to save the 70-year-old barn, but Juhl says they soon learned their efforts were futile. “When we first got on scene, we were trying to see if we could knock it down quick but it didn’t take long for us to realize we’re not going to be able to knock it down with it being full of straw up in the loft,” he says. “We 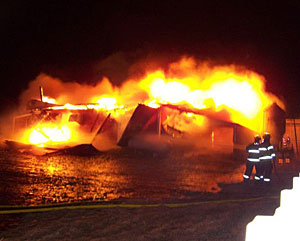 Attempts to save the 70-year-old barn failed.

went on the defensive, trying to control how it burns.” The fire was kept from a propane tank and after about two hours, the barn collapsed.

No human injuries are reported. The cause of the fire is under investigation.