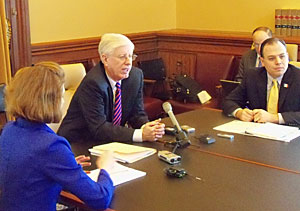 A state panel ruled unanimously this morning that two drunk driving offenses are not enough to keep someone from being a candidates for office in Iowa.

The ruling — which could impact thousands of potential candidates — came after Democrat Ned Chiodo argued fellow Democrat Tony Bisignano’s arrests should make him ineligible to run in the primary for a state senate seat in Des Moines.

Attorney General, Tom Miller, led the review panel. “With the ability to vote in question for 35,000 to 50,000 Iowans — this is quite a weighty matter,” Miller says. “And I think that it’s appropriate to consider that in the context of our analysis because of the court’s position consistently that the right to vote is so fundamental.”

Miller believes Iowa lawmakers did not intend a second OWI to rise to the level of an “infamous crime” that would keep someone from running for office. “The statutory result is that Mr. Bisignano can continue to be a candidate, and it wouldn’t be overturned on constitutional grounds,” Miller says.

Secretary of State Matt Schultz, also a panel member, agreed with Miller’s assessment. “I concur with your analysis. I think that — as I said before — an infamous crime is a felony under Iowa law and that that does not conflict with the constitution. And I too will be voting to leave Mr. Bisignano on the ballot,” Schultz.

Schultz, who is also the Commissioner of Elections, says 20 years of rulings show review panels always interpret the law in favor of the person being challenged. “I think Mr. Bisignano has a right to be able to run for election as well as a right to vote. And anyone else who would fall under this challenge — I would rule that way as well,” Schultz says.

State Auditor, Mary Mosiman, is the third member of the panel. “The lawmakers have had the constitution and the Supreme Court decisions in front of them and they did seem to purposely not include aggravated misdemeanors in the definition of infamous crimes or felonies. So, I don’t possibly see how we could bar Mr. Bisignano and thousands of other voters from participating in the voting process,” Mosiman says.

Gary Dickey, Chiodo’s attorney, says they are disappointed, but are not done. “I think it was clear the panel just didn’t feel comfortable declaring the legislature, the statute, in conflict with the constitution. That’s what the courts are for and that will be the next place that we will raise our challenge,” Dickey says.

The issue would go to the district court, and Dickey believes it will be on a fast track. “This issue is much too important to leave unresolved,” Dickey says, “as the panel indicated, there is clearly some ambiguity between the constitution and statute.”

Joseph Glazebrook represents Bisignano. “It’s the type of decision that should be made by the voters and not a legal technicality, so we are very pleased,” Glazebrook says.