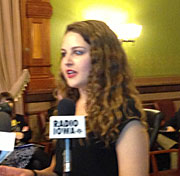 Student leaders from Iowa’s three state-supported universities are at the statehouse today to tout year two of a freeze on in-state tuition rates for undergraduates at Iowa, Iowa State and UNI.  Iowa State University Student Body president Spencer Hughes, a senior from Cedar Rapids, says it’ll help the 19,000 ISU students who are from Iowa.

“This investment will pay off time and time again down the road in our state’s future,” Hughes says.

The board that governs the universities has said tuition rates for in-state students will stay the same if state taxpayer support of the universities is increased by four percent. Governor Branstad included the extra money in his budget plan and legislators have drawn up a state budget outline includes that budget boost for the universities, too.  Hannah Walsh, a University of Iowa junior from Spirit Lake who is the student member of the Board of Regents, says most states are cutting their support of higher education.

“The State of Iowa, however, is not following this national trend,” Walsh says. “The last two years our divided legislature has appropriated positive increases in support of our Regents universities. I believe our legislators understand that higher education is not a subject of political party, but instead is fundamental to the future success of the state of Iowa and its people.”

“If UNI does not receive additional revenue this year, UNI is going to face a budget shortfall and difficult decisions are going to have to be made,” Madsen says.

The tuition freeze does not apply to out-of-state students, nor does it apply to those seeking a masters or a doctorate. The president of the executive council of Graduate and Professional Students at the University of Iowa is lobbying lawmakers to enact a tax credit for graduate students from Iowa, Iowa State and U-N-I who get a job in Iowa after they graduate.

The students made their comments over the noon hour during a statehouse news conference.