You are here: Home / Military / Remains of soldier missing since 1944 to return to Iowa 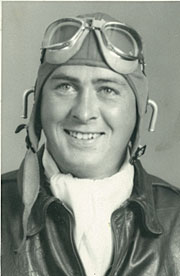 A memorial service Saturday in eastern Iowa will honor a soldier whose remains were recently found after he went missing in World War Two more than 70 years ago. Iowa National Guard spokes, Colonel Greg Hapgood, says the story began as 26-year-old Louis Longman of Clinton was on his 89th mission.

Hapgood says Longman was a P-38 fighter pilot who was returning from bomber-escort mission on April 16th, 1944 when a tremendous storm blew up. Hapgood says the storm caused major damage to the returning bombers and fighters. “The Fifth Air Force lost 53, pilots/crewmembers in that storm — because of the missing aircraft, aircraft that crashed, etcetera. His was one of those aircraft that went missing on that day,” Hapgood says.

He says the Air Force has traditionally called that day “Black Sunday” because of the number of airmen lost.

Longman was officially declared dead in February of 1946, but his remains were never recovered from the area of New Guinea where he was last flying. “When you think about the jungles of New Guinea, it’s one of the most forbidding areas on earth if you are going to try to find a crashed aircraft or the remains of person,” Hapgood says. “The jungle is extremely thick there. It’s actually littered with aircraft from World War Two, not only allied aircraft, but also enemy forces as well.”

Lieutenant First Class Longman’s fate remained unknown until a villager in a remote area of New Guinea found a Colt pistol in 2005. Hapgood says that started the search process for Longman’s remains. “They traced the serial number of that handgun and figured out that it had been carried by him on that mission. After the handgun was found, the Department of Defense sent some recovery teams over a couple of different times,” Hapgood explains. “They were able to pinpoint the location in the jungle, find remnants of his aircraft and find some his remains and affects as well.”

Hapgood says the search teams found enough evidence to positively identify Longman’s remains that they did not need to use DNA. Longman’s loss was just one part of a double blow that struck the Clinton family during the war. “Lieutenant Longman’s brother Richard was a navigator on a B-17 bomber in the European theater. He went missing in action as well. So, the family at one point in time had two airmen that were missing in action during World War Two,” Hapgood says. “His brother was actually captured by the Germans and spent time in a prisoner of war camp — about 14 months — and was released at the end of the war. But, Louis Longman was never found until recently.”

Louis Longman’s parents, four brothers and four sisters, are now all dead, but Hapgood says he has several nieces and nephews throughout the midwest who plan to attend Saturday’s memorial service. The service is at the Rock Island Arsenal National Cemetery Saturday at 1 p.m.