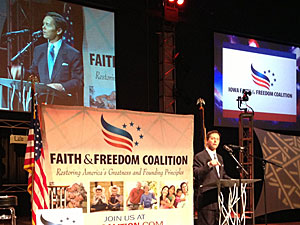 A co-founder of the Christian Coalition says he hopes to recruit hundreds of opinion leaders in Iowa neighborhoods and churches to encourage Christian conservatives in Iowa to vote this November.

Reed is targeting states with competitive races for U.S. Senate seats and that includes Iowa.

Reed pegged the cost of his organization’s Iowa effort at half a million dollars.

“We are going to have a church coordinator in every key Evangelical church in this state and we’re going to have a precinct captain in every key precinct in this state and every one of those precinct captains and church coordinators is going to be making sure that they’re talking to the voters, the members of their church and the voters in their neighborhood, because that’s all a precinct is, and make sure they get voter guides and information,” Reed said.

But the effort will include a sophisticated on-line effort as well. Reed cited a recent  special election for a congressional seat in Florida as proof this kind of targeting works.

“We have built a national database at Faith & Freedom of 22.3 million  Evangelical and faithful Catholic voters and in Florida 13 where they had this special election the other day we identified 81,000 voters and we pushed out videos or voter guides on their Facebook page or on any website they visited,” Reed said.

The Republican candidate in that congressional race in the Tampa area narrowly won, by just 3400 votes out of the 183,000 that were cast.