You are here: Home / News / Davenport riverfront likely to see flooding by Monday 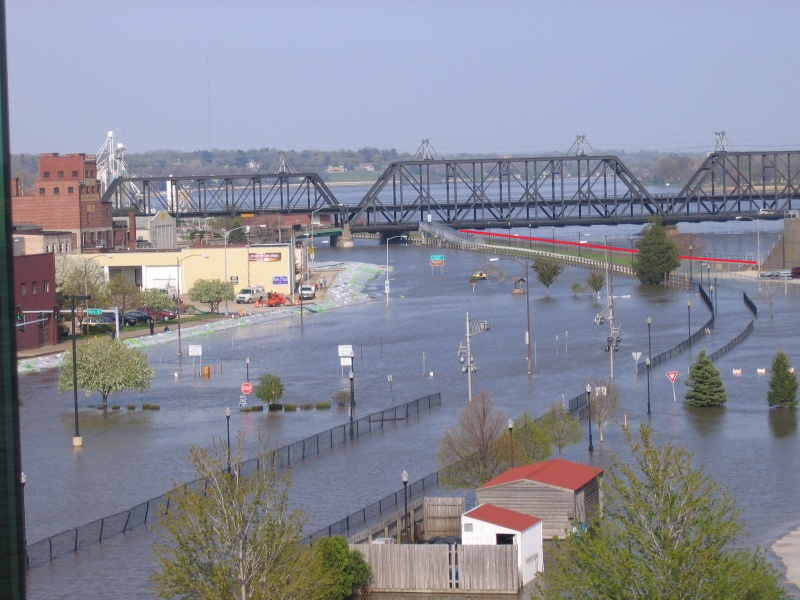 Davenport’s riverfront flooded in April of 2008

As some areas of the country face a third year of drought, parts of eastern Iowa are preparing for flooding.

The Mississippi River is creeping upward and the hydrologist at the National Weather Service office in the Quad Cities says the crest will likely reach Davenport on Monday.

Meteorologist Maren Stoflet says last weekend’s heavy rain is a big part of the reason for the rising river.

“Rainfall amounts in some areas hit two to four inches, maybe a little higher in the heaviest bands,” Stoflet says. “Eventually, that water will work its way through the river system and make its way into the Mississippi River, we’re forecasting rises to near or just over flood stage along the Mississippi.”

The latest forecast calls for more rain in the Davenport area Saturday into Sunday, though it’s still unclear how much may fall, which would impact the timing of Monday’s predicted flood crest.

“We’re forecasting either the crest to be just below flood stage or just over what we consider minor flood stage, so some impact but on the minor end,” Stoflet says. “What we will have to watch is any additional rainfall to the north as well and if that were to be heavy enough, then those river levels and the forecast could change.”

Public works officials in Davenport have already ordered temporary floodwalls to be placed along the riverfront, but the impact of the rising water is expected to be minimal.

“They have plans, depending on the river forecast, to respond to those levels,” Stoflet says. “Again, this is just over minor flood stage so often there’s some activities that take place to mitigate for flooding but it’s a pretty minor event this time around, it looks to be.”

Get updates on the forecast at www.weather.gov.