You are here: Home / Education / Branstad: private & Christian schools should be included in anti-bullying bill 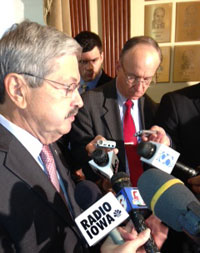 Governor Terry Branstad says private schools should be included in any anti-bullying measure the legislature passes this year.  Some of Branstad’s fellow Republicans in the House have expressed concerns about the bill, hoping to make it apply just to public schools.

“I don’t see any conflict or any problem of working both public and private schools,” Branstad told reporters late this morning. “We want all of our kids to be safe, regardless of where they go to school.”

Some Republicans say the bill goes too far and students could be labeled bullies for expressing their personal religious beliefs. Others say there’s no need for the legislation, as current Iowa law already gives school officials ample authority to address bullies.

“This is a more effective law that will give schools the tools they need to protect all our kids and to make sure we don’t have more of these tragedies,” Branstad said.

Branstad has been asking legislators for the past two years to pass anti-bullying legislation that would give school administrators more authority to police bullying outside of school, especially on social media.

“We should not wait ’til there’s another tragedy or suicide,” Branstad said. “We ought to take action now to protect Iowa children so they’ll be safe in our schools and give our educators the tools they need to deal with that issue.”

Democrats in the Iowa Senate have passed an anti-bullying bill, but it has not yet been debated by the Republican-led Iowa House.