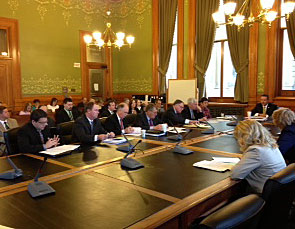 A bill to dramatically reduce the number of greyhound races run in Iowa is advancing quickly at the statehouse. Senator Jeff Danielson, a Democrat from Cedar Falls, opened a senate subcommittee meeting on the bill early this morning.

“So here’s what the bill does: it offers a soft landing and a second chance for those that are currently engaged in greyhound racing,” Danielson said.

Dog races are held today at tracks in Council Bluffs and Dubuque, but the bill calls for racing to cease in Council Bluffs at the end of 2015. The casinos that finance dog races today will pay $72 million over the next seven years. Half of that money will go into a fund to pay greyhound owners and breeders who intend to get out of the business. The other $36 million can be used by those in the Iowa greyhound industry who want to continue racing in Dubuque.

Don Avenson, a lobbyist for the Iowa Greyhound Association, told senators there’s been an “emotional debate” within the organization about this deal. “There’s an opportunity for them through the ‘soft landing’ to find a different world. Also there’s an opportunity for some of them to continue racing,” Avenson said at this morning’s senate subcommittee hearing. “…The membership voted with one negative vote to accept the agreement, so we think it’s the best that we can work out under these circumstances. We thank the two tracks for their continued negotiation and working this out.”

Avenson estimates there are 300 farms in Iowa where greyhounds are raised with some 50 owners involved in the 29 kennels that manage the dogs which race at the two Iowa tracks today.

James Carney, a lobbyist for Caesar’s which owns the Horseshoe Casino in Council Bluffs where the “Bluffs Run” is located, offered this statement at the end of this morning’s meeting: “To our knowledge there have been 29 dog tracks closed in this country and this is unprecedented what is taking place, the amount of the payments and how this is being handled.”

The bill cleared the senate subcommittee this morning.  It is scheduled to be considered in a full senate committee late this afternoon.

The bill as currently crafted would have the Iowa Racing and Gaming Commission manage the payouts to those who are retiring from the greyhound industry after at least five years of racing in Iowa.  The payouts are to be based on several factors, including the number of greyhounds that have raced. The legislation also would allow Iowa agencies that find new homes for greyhounds retired from the racing circuit to receive some of the money.  There are only three such agencies operating in Iowa today.