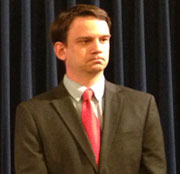 Iowa officials plan to hold another “Iowa Teacher and Principal Leadership Symposium” this summer. Iowa Department of Education deputy director Ryan Wise says the discussion will center on the 2013 education reform package that calls for changes in Iowa’s schools.

“We have a great opportunity unfolding in Iowa and I’m confident we’ll make the most of it,” Wise says. “Iowa’s new teacher leadership and compensation system is revolutionary by itself. For example it improves entry into the teaching profession, fosters collaboration among teachers and rewards excellence with pathways to career opportunities that come with greater leadership opportunities and increased pay.”

The event will be held in Ankeny on Monday, August 4. It will feature the experiences of two Iowa school districts which started last fall to implement a new system where teachers get more instant feedback on their classroom methods. Lieutenant Governor Kim Reynolds has visited with teachers in the Saydel and Central Decatur districts.

“They loved working together, the collaboration. There’s the master, the mentor teacher which helps coach but is also in the classroom and they thought that was an important component of it because if you leave the classroom sometimes you forget what you’re dealing with,” Reynolds says. “…They want to have an opportunity increase the the profession as a whole.”

Thirty-nine other districts have gotten state grant money to implement this mentoring program starting this fall. Saydel and Central Decatur districts got a federal grant to start implementing the changes last fall. Reynolds says teachers in those districts told her they are excited about the changes.

“They talked about how hard it was…the time, but they were very optimistic about what they were learning,” Reynolds says. “…Some of the master teachers can model teach for them in the classroom, so to have that full-time professional development was really just a big thing to them.”

Brad Buck was superintendent of Saydel when the district got the federal grant in 2012 and he helped launch the new teacher leadership program before leaving that job to serve as Governor Branstad’s education director.