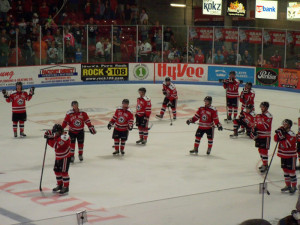 The Indiana Ice spoiled the celebration in Waterloo Tuesday night. Playing their final game ahead of an uncertain future, the Ice edged the Waterloo Black Hawks, 3-2, at Young Arena to win the United States Hockey League’s Clark Cup Championship. Despite the loss, it still was a banner year for the Black Hawks.

“This one’s a little rough, but it was a great season that can’t be debated,” Waterloo Coach P.K. O’Handley says. His team set a franchise record by winning 44 of its 60 regular-season games. The Black Hawks won the Anderson Cup as the USHL’s regular-season champion, then won eight more playoff games while reaching the post-season finals for the fifth time in the last eleven years.

O’Handley says Tuesday’s loss was a bitter one. “It’s a tough one, it’s raw on a lot of levels. Time will put a stamp on this group that was arguably one of the best — if not the best — Black Hawks team. But right now this stings pretty good,” O’Handley says.

Two third period goals allowed Indiana to rally from a 2-1 deficit. The Ice outshot the Black Hawks 44-35 and scored the game-winner when Brian Pinho ripped a low shot that snuck inside the goalpost with just over two minutes remaining. O’Handley says Indiana took advantage of Waterloo’s miscues.

The loss was especially bitter for Black Hawks goaltender Cal Petersen, who’s from Waterloo. The game brought an emotional end his two-season career in the USHL. The 2013 Buffalo Sabres draft pick will play at Notre Dame next season.
Audio:  Petersen :20

The win gives Indiana its second Clark Cup in franchise history. The Ice don’t have a home rink to play on next season. Indiana will be a dormant franchise in 2014-15, making it possible that Tuesday’s win could be the final game for the Ice in USHL competition.