You are here: Home / Health / Medicine / Governor signs bill to grant immunity to chronic epileptics who use cannabis oil as treatment 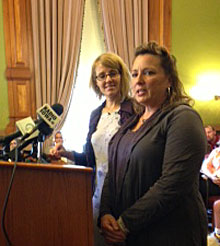 Supporters call this a banner day, as Governor Terry Branstad has signed a bill into law that provides “targeted immunity” in Iowa for the possession of cannabis oil as treatment for chronic epilepsy.

Two mothers who led the lobbying effort for the bill spoke with reporters moments after the bill signing ceremony. Maria La France of Des Moines has a son who suffers from epilepsy and she had some choice words a few months ago when a legislator told her the bill could not pass the legislature. She had words of praise for the governor and legislators today.

“The number one message is gratitude and thank you so much for your unwavering,” La France said, growing emotional as she paused, stepped back from the microphone and whispered “support” to finish her sentence.

Sally Gaer of West Des Moines has a daughter who suffers from intractable epilepsy.

Governor Terry Branstad signed the bill in front of a huge gathering of parents and children with epilepsy, as well as about a dozen legislators who had worked on the bill.

“And I’ve got to say I was skeptical at first, but having visited with the families, having talked with my colleagues — the governors of Utah and Alabama that passed similar legislation this ytear, I became convinced this was appropriate policy for the state of Iowa,” Branstad said, as the crowd cheered and clapped. 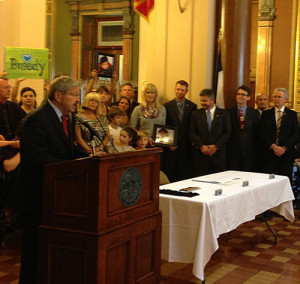 The next hurdle for these children with epilepsy so severe they sometimes suffer hundreds of seizures a day is to get an Iowa neurologist’s recommendation to take cannabis oil as treatment. Then, the families will have to travel to places like Michigan, Colorado or Oregon where the product is legally dispensed.

La France told reporters at the statehouse there’s also the prospect of waiting lists in some of those areas. “We have to be optimistic. If I was not an optimistic person I never would have kept coming up here,” La France said. “…My uncle who is 80 lives in Oregon and he said there’s fantastic doctors and really great weed, so I might personally go out to Oregon. Wherever I can find what is going to help my son is where I will go.”

Other advocates who lobbied for the new law say they’ll be back at the statehouse next year, asking legislators to approve cannabis oil as treatment for other chronic conditions, like cancer and post traumatic stress disorder. Governor Branstad, however, has said he is not interested in expanding this new law, which takes effect July 1.