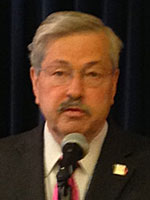 Governor Terry Branstad may order the demolition of cottages for delinquent teenage girls on the now-closed Iowa Juvenile Home campus in Toledo.

“It’s already in bad shape and I think the task force that we appointed said the residential aspect of that didn’t meet the standards that we require of non-profits in the state of Iowa,” Branstad told reporters this morning.

Branstad closed the facility in January after a watchdog agency reported some of the delinquent teenage girls who were sent to the home had been mistreated. The governor says some newer structures on the Iowa Juvenile Home campus could be used for educational purposes, but Branstad appears to be leaning toward tearing down the residential cottages. Branstad says those cottages “are not appropriate for housing children.”

“I think all options should be looked at,” Branstad said. “We need to do what’s in the best interest of the community and I want to make sure that asset is made available to the community in a way that would help economic development and growth in the Tama County area.”

Legislators set aside money to keep two long-time maintenance employees on the site while a lawsuit challenging the governor’s decision to close the facility is pending. In April, Representative Dean Fisher, who represents the area, said those two workers “know every circuit breaker and every valve and what is an historical artifact and what it junk.”

However, the governor used his item veto power to erase the specific reference to those two workers in the budget bill, meaning those workers are out of a job on June 30. Branstad’s staff says other employees from nearby state facilities will be sent to Toledo to mow the grass and perform other routine maintenance on the Iowa Juvenile Home campus.