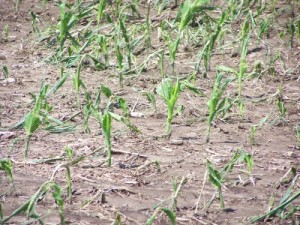 After last week’s heavy rains, strong winds and, in some cases hail, many Iowa farmers are considering their options as to whether they should re-plant or hope the damaged crops can survive. Either way will probably mean a reduction of yield potential.

Iowa State University Extension crops specialist Joel DeJong says replanting corn during the middle of June will probably result in a 40-to-50 percent cut in yields. “If you compare that to living plants that are still up and able to grow, that are probably in the 10,000 to 12,000 plants per acre (range), it’s almost a toss,” DeJong says. “You have to think of other things like insurance, weed control, how healthy are those plants, and all those types of things.”

The Iowa State University crops specialist says soybeans can handle some delayed planting, but farmers can probably expect reduced yields there, too. “We’ve got about a two-thirds yield potential, but the later the planting date, frost becomes a bigger issue,” DeJong says. “We might get higher than a two-thirds yield compared to a full yield, but it might be less depending how early the frost hits.”

DeJong says each farmer must evaluate their own situation in order to make the right decision for themselves.