You are here: Home / News / Iowa in midst of another quiet year for tornadoes 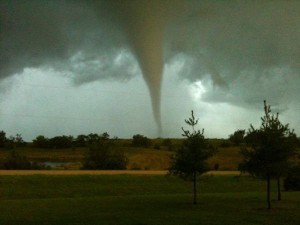 It’s been a relatively quiet year in Iowa for tornadoes. Only 11 twisters are confirmed and State Climatologist Harry Hillaker says, on average, there would normally be twice as many by this time of the year.

“Obviously, one of the big ingredients you need for tornadoes is warm and humid air and if you got a lot of cold fronts moving through the area like we’ve had this year, once you’re behind that cold front, it’s basically almost impossible to get at least strong tornadoes in that situation,” Hillaker says.

For now, this is Iowa’s third year in a row with below-average tornadic activity. “The last two years were very quiet, partly due to a very initially cool spring up in this part of the country,” Hillaker says. “In 2012, we had a very, very warm spring, in fact a record warm spring that year, but we were lacking the moisture, so it was just one of those things. We haven’t quite got the timing down.”

Iowa gets more tornadoes in June than any other month. But, so far this June, there have been none. Hillaker expects a more active weather pattern starting this weekend. Iowa set its tornado record in 2004 with 120 confirmed touch downs.