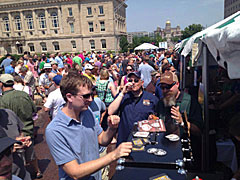 Over 200 beers will be available for sampling Saturday at the Fourth Annual Iowa Craft Brew Festival. The event runs from 1 to 5 p.m on the Court Avenue Bridge in downtown Des Moines.

Jay Wilson, with the Iowa Brewers Guild, says the craft beer craze has been growing at a rapid pace in Iowa over the last four years, thanks in part to state lawmakers. “We had a really good law change back in 2010 that allowed Iowa breweries to brew beers higher than six-percent alcohol. That was a real bump upward in freedom for the Iowa breweries to be allowed to compete (with breweries in other states),” Wilson says.

There are now more than 50 breweries in Iowa and 33 of them will be pouring beers at the festival. Wilson says most of the breweries are thriving and looking to add more tanks and space. “The breweries that we have are growing and beer drinkers are enthusiastic and being very supportive,” Wilson says. “Of course, you hear people talking about what’s the threshold or saturation point? I think we’re pretty far away from having a saturation point in Iowa. We have lots of room to grow.”

VIP tickets to the Iowa Craft Brew Festival are sold out. VIP pass holders get early access in to the festival from 1 to 2 p.m. General admission ticket holders can enter the festival grounds at 2 p.m. Wilson wrote a book, released this week, titled “Iowa Pints: A Guide to Iowa Breweries.”