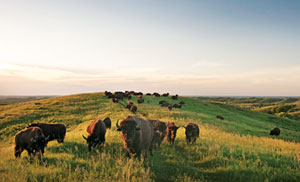 Buffalo at the Broken Kettle Grasslands Preserve in Plymouth County.

If you went on an African safari, you’d expect to see things like lions, hippos and giraffes, but Iowa has its own version of the safari on the state’s largest remaining native prairie. Jan Glendening, state director for the Nature Conservancy in Iowa, says the Broken Kettle Grasslands Preserve contains more than 200 species of plants, 150 species of birds and the state’s largest herd of bison.

The preserve is hosting its fourth annual Bison Day event on July 12th. “We’ll have the chance to take a hay rack ride out into the Loess Hills and see the bison up close and personal,” Glendening says. “There’s also several other activities, from face painting and scavenger hunts for children. We’ll have a bald eagle there and an educational program. You can see the reptiles of the Loess Hills.”

Other native creatures include the black-billed magpie and the prairie rattlesnake, as great efforts have been taken to preserve the land and restore it to how it would’ve looked long before Iowa became a state. Glendening says, “In many ways, it’s a chance to take a step back in time and get a sense of maybe what Iowa was like back in the 1800s.” 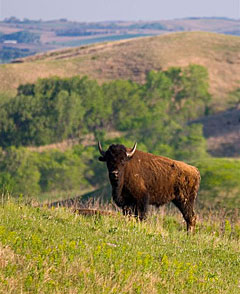 The bison herd was started in northwest Iowa five years ago with 28 animals from the Wind Cave National Park herd in South Dakota and since then, it’s almost quintupled in size. “It’s one of two herds in the United States that doesn’t show any cattle integration into the genealogy of it and we’re really excited and very proud of that,” Glendening says. “It’s a satellite herd for the Wind Cave herd and now we have more than 125 animals and we have a carrying capacity of over 250 animals so the herd is growing every year.”

With most of the nation’s original tallgrass prairie gone, she says Broken Kettle is part of the planet’s most-endangered and least-protected natural community. It’s located just north of Sioux City in Plymouth County.