You are here: Home / Fires/Accidents/Disasters / Two rescued from floodwaters in Fayette County 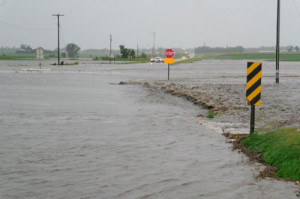 The Fayette County Sheriff’s Department took this picture of the flooding.

Both rescues occurred around 4 p.m. in an area along Highway 93 between the towns of Sumner and Fayette.

Fayette County Sheriff’s deputies were first called to the area on the report that a motorist tried to drive through water over the highway and the vehicle stalled. Deputies and others were able to rescue the motorist, identified as 24-year-old Deangelo Bivins of Westgate.

Deputies then noticed a woman and two dogs were stranded in a nearby home that was surrounded by water that was beginning to enter the home.

A 500 gallon LP tank was floating toward to home as well. Maynard firefighters helped deputies rescue the woman and her pets. No one was injured. 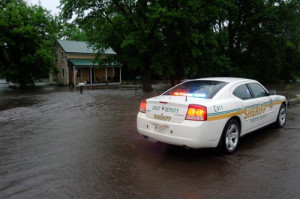 A woman had to be rescued from this home in Fayette County.