You are here: Home / News / Lawn mowers set to race in Carlisle 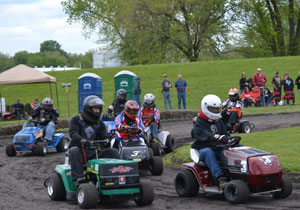 Dozens of lawn mowers will be making a lot of noise this weekend in the south-central Iowa town of Carlisle, but they won’t be cutting grass.

The National Lawn Mower Racing Summer Nationals roll into Carlisle for races on Saturday and Sunday at the River Bottom Raceway, where Doug Baber is co-owner.

It may sound like a bit of a novelty act, but Baber says the drivers are serious about the competition, despite the fact that there’s no money on the line. “It’s in our rules that we don’t race for any kind of money at all,” Baber says. “It’s for bragging rights and trophies.”

The blades on the riding mowers are removed for safety and the engines are modified, so they’ll reach top speeds of roughly 50 miles an hour on the 1/10th mile dirt track. Baber says lawn mower racing has been popular in the southern U.S. for a few decades, but the sport is now gaining traction in Iowa and neighboring states.

“There have been a handful of us that have been messing around with it for about 8 years now, so it’s fairly new here in the Midwest, but it’s starting to take off pretty good,” Baber said. Racing is scheduled to begin at 3 p.m. on Saturday and 1 p.m. on Sunday. Admission is $5 for adults. Children 10 and under get in free.

Around 150 lawn mower racers will be vying for the title of “top blade runner.”