You are here: Home / Fires/Accidents/Disasters / Some damage, no injuries reported in latest tornadoes 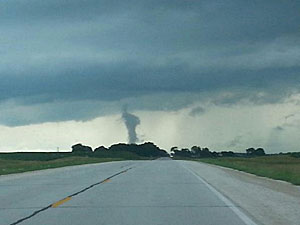 Meteorologist Rod Donovan, at the National Weather Service, says there was baseball-sized hail reported near Magnolia in Harrison County, while Winterset had 60-mile-an-hour wind gusts. “We did have one confirmed tornado up by Stanhope,” Donovan says. “We did have numerous other possible brief touchdowns anywhere from just southeast of Otho all the way eastward towards Morrison, which is southeast Grundy County.”

There are no reports of any serious injuries from this bout of violent weather and he says damage reports are scattered across Iowa. “The most damage we’ve heard is just southeast of Otho where one farmstead was hit and possibly a lot of outbuilding damage, grain bin damage, trees,” Donovan says. “That’s mainly been our damage overnight, not a lot of structures or homes. We have heard near Morrison which is either thunderstorm wind damage or possibly a brief tornado which was several homes were damaged up there as well.”

Some areas of eastern Iowa report rainfall of three to five inches in 24 hours, which meant flash flooding on the already-saturated ground. “We did have storms from Highway 20 dipping down towards Cedar Rapids overnight last night,” Donovan says. “A lot of that rain, we did have reports of two-and-a-half inches in 37 minutes so it really came down quickly. The main impacts, a lot of roads were washed out up in Grundy County, southern Black Hawk County and towards Cedar Rapids.”

Some motorists were stranded in both Cedar Rapids and Waterloo by the fast-rising water. They had to be rescued by emergency responders. More storms are rolling across Iowa and forecasters say it may very well be another rough day. “Right now, it looks mainly along and south of Highway 20 once again,” Donovan says. “The focus might be even more from near Sioux City through Des Moines and down towards Cedar Rapids and Davenport and on south is the focus today. Extremely damaging winds in excess of 70 miles an hour, tornadoes are certainly possible today in addition to large hail, in excess of baseball size.”