You are here: Home / Fires/Accidents/Disasters / Firefighters go from holiday parade to work in western Iowa 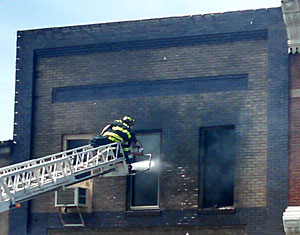 Some firefighters left a 4th of July parade to help fight this fire in Audubon.

Some western Iowa firefighters had to go quickly from throwing out candy at a parade to throwing water on a fire Friday. Crews from Adair, Atlantic, Brayton, Exira, Manning and Templeton all responded to help out with a fire in downtown Audubon Friday.

Audubon Fire Chief John Ballou says the help arrived quicker than normal from the other departments, as they were all taking part in a nearby Independence Day parade.

“It was fortunate most of the units happened to be in Exira at the end of their parade — so they were only about nine miles away,” Ballou says. The fire call came around noon, and Ballou says the flames were pretty much knocked down by around 3:30 p.m. No injuries were reported.

Audubon’s mayor says the top of the building was vacant and the lower floor was used primarily for storage. The cause of the fire and a dollar amount of the damage are not yet known.