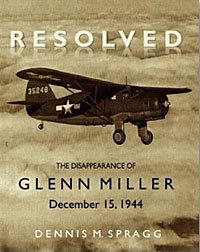 A program premiering tonight on Iowa Public TV takes a fresh look at the mystery surrounding the death of Iowa native and legendary big band leader Glenn Miller. Miller was aboard the plane that vanished in December of 1944 over the English Channel after taking off in heavy fog, headed for France to entertain the troops.

Dennis Spragg, senior consultant to the Glenn Miller Archive at the University of Colorado Boulder, says the C-64 plane very likely suffered mechanical failure and crashed at sea. “The Pratt and Whitney 1340 engine had a carburetor in it that was susceptible to carburetor heater failure,” Spragg says. “That is, the heater that prevented ice from forming in the carburetor was defective and this was known to the Army Air Forces.”

Spragg, who’s written a book called “Resolved,” about Miller’s military service and disappearance, says this remains one of the biggest mysteries — and cold cases — from World War Two. “There will never be definitive proof unless you find the wreckage and you won’t find the wreckage because the aircraft probably shattered upon impact,” Spragg says. “We’ve run models of the potential crash and there’s no way anybody survived or that the aircraft itself remained intact.”

Spragg, an Iowa State University graduate, is among the experts interviewed for “History Detectives Special Investigations.” The program aims to lay to rest the many conspiracy theories about the Clarinda native’s death, including that he was part of a secret plot to overthrow Hitler or that he died in the arms of a French prostitute. Spragg says news of Miller’s disappearance was announced on Allied radio on December 24th of 1944. “The very next day, on December 25th, German radio announced that Glenn Miller had died in a Paris brothel and that the Allies were lying,” Spragg says. “A little bit of German mischief, I suppose.”

The Public TV program offers a host of new details: Miller’s pilot was a novice who had never flown over the English Channel, let alone in foul weather; a plane spotter’s notebook that was discovered in 2012 at a UK Antiques Roadshow detailing the route Miller’s aircraft took; or that the German-speaking Miller was working for the U.S. Army’s Psychological Warfare Division, recording German language propaganda broadcasts and musical performances. “History Detectives Special Investigations” airs tonight at 8 on IPTV.