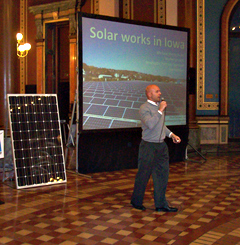 Tim Dwight makes a presentation at the statehouse in 2012.

An Iowa native who has become an advocate for solar power says the ruling by the Iowa Supreme Court in a Dubuque case will help push the industry forward. The court ruled a company using solar energy to power a building for the city of Dubuque is not an electric utility and not infringing on the established power company.

Tim Dwight got involved in the solar industry after playing football for the University of Iowa and a nine-year career in the NFL. “It is great news for everybody in the energy industry,” Dwight says.

Dwight owns Integrated Power, which is based in California, but says he does most of his core work in Iowa. “You know this phototaic solar technology is starting to scale to become more cost effective and now we are really starting to understand the benefits of the technology and how we implement it,” Dwight says. ” I see this decision by the Supreme Court of Iowa as a huge step foward in the adoption of phototaic, in the adoption of more clean energy on our grid.”

Dwight spokes to Radio Iowa while at an event promoting his company’s products in Mason City. He says the solar industry is going to continue seeing a lot of uses, from the type in the court case to the use at private homes. “Because it’s all different for everybody. Some people might want to own their system and have the means to buy a full system for their house. Some people might have trees in their back yard that are blocking their southern exposure, so they are going to have to look at community solar options,” Dwight says. He says people may look to a solar cooperative that buys and leases solar panels that generate electricity that is then pushed out to the utilities.

Dwight says there is room for multiple types of power generation. “That’s what’s important about the industry, is making sure that we structure things appropriately and correctly. That one, everybody is winning in the market, not just the solar installer, not just the customer, but the ratepayer as a whole and the utility,” Dwight says. “And do it in a way where your are maximizing the benefit of what the technology is.”

A spokesman for the Iowa Utilities Board says the board is reviewing the court decision and will factor that decision into its inquiry of the broader topic of distributed generation.